Wonder What Your Vehicle Is Worth? Find Out

J.D. Power Reports:Korean Brands Lead Industry in Initial Quality, While Japanese Brands Struggle to Keep Up with Pace of Improvement

WESTLAKE VILLAGE, Calif.: 17 June 2015 - With a significant year-over-year improvement, Korean brands continue to widen the quality gap with other automakers, while Japanese makes collectively fall below industry average for the first time in 29 years, according to the J.D. Power 2015 U.S. Initial Quality StudySM(IQS) released today.Read More...

HYUNDAI SNARES MOST INITIAL QUALITY AWARDS IN ITS HISTORY

These particular nameplates have won a category award twice in AJAC's history, and continue Hyundai's recent winning ways in the competition. Since 2011, the Tucson, Accent, Elantra, Veloster, Elantra GT, Santa Fe Sport, and now the Sonata and Genesis have each received honours. As category winners, Sonata and Genesis both accede to the final list of contenders for the 2015 Canadian Car of the Year title that will be announced February 12, 2015.

"Genesis and Sonata represent the direction that Hyundai is taking for the future," said Don Romano, President and CEO of Hyundai Auto Canada Corp. "Both models showcase our new, more refined and sophisticated design, advanced engineering, rewarding driving dynamics, and cutting-edge safety equipment, which is truly representative of what's to come from us. We're focused on elevating the complete Hyundai experience and our products are at the forefront of this evolution."

Sonata and Genesis were among more than 45 vehicles tested by73 experienced automotive journalists during a week-long event known as "Tech Fest." Each model was put to the test in a variety of environments, and comprehensively evaluated in 21 different areas to determine which vehicle is the best new offering in its category. Vehicles were driven back-to-back with the strongest new competitors in the industry so that the results have relevance to the consumers.

"Competitions like this one are fantastic opportunities to put Hyundai products to the test against the best names in the industry," added Romano. "Consumers today are presented with so many good automotive options that it's great to see Hyundai products perform so well in such a competitive environment."

Hyundai Auto Canada, established in 1983 and headquartered in Markham, Ontario, is a subsidiary of Hyundai Motor Company of Korea. Hyundai vehicles are distributed throughout Canada by Hyundai Auto Canada and are sold and servied through more than 210 dealerships nationwide. Hyundai is also the first to offer its zero-emissions Tucson Fuel Cell Electric Vehicle to Canadian customers. More information about Hyundai and its vehicles can be found at www.HyundaiCanada.com

HYUNDAI SNARES MOST INITIAL QUALITY AWARDS IN ITS HISTORY

MARKHAM, Ontario (June 18, 2014) - J.D. Power today recognized Hyundai as the top-performing non-luxury brand for initial quality and presented three Hyundai vehicles - 2014 Genesis, 2014 Elantra and 2014 Accent - their highest award in their respective segments in the U.S. Hyundai ranked fourth overall in initial quality, climbing six spots from last year. In total, Hyundai had six vehicles in the Top Three positions in their segments, including two second place finishes for Santa Fe and Sonata and a third-place finish for Equus. This year's results mark the third time Hyundai has been the highest-ranked non-luxury brand in the past 10 years, and the third time it finished among the Top Four brands overall.

The award comes from the J.D. Power 2014 U.S. Initial Quality StudySM (IQS). Now in its 28th consecutive year, IQS is the industry benchmark for new-vehicle quality, measured at 90 days of ownership.

"Receiving IQS awards in multiple vehicle segments acknowledges Hyundai's commitment to quality and customer satisfaction across our entire product lineup, not just our luxury vehicles," said Don Romano, President and CEO, Hyundai Auto Canada Corp. "Today's awards are a true reflection of the hard work and dedication of all the Hyundai team members in our factories around the globe."

The IQS serves as the industry benchmark for new-vehicle quality and has proven to be an excellent predictor of long-term reliability, which may significantly impact new-vehicle purchase decisions. The focus of the study is model-level performance and comparison of individual models to similar models in respective segments, which helps manufacturers worldwide to design and produce higher-quality vehicles.

ABOUT THE J.D. POWER AND ASSOCIATES 2014 U.S. INITIAL QUALITY STUDY

The 2014 U.S. Initial Quality Study is based on responses from more than 86,118 purchasers and lessees of new 2014 model-year cars, trucks and multi-activity vehicles surveyed after 90 days of ownership. The study is based on a 233-question battery designed to provide manufacturers with information to facilitate identification of problems and drive product improvement. The study was fielded between February and May 2014. The study is used by manufacturers worldwide to improve quality and by consumers to help them make more informed purchasing decisions. Throughout the years, initial quality has been shown to be a leading indicator of long-term durability, which directly impacts customer loyalty and purchase decisions.

Performance Hyundai Is The #1 Hyundai Dealer in Canada 2 years in a row! 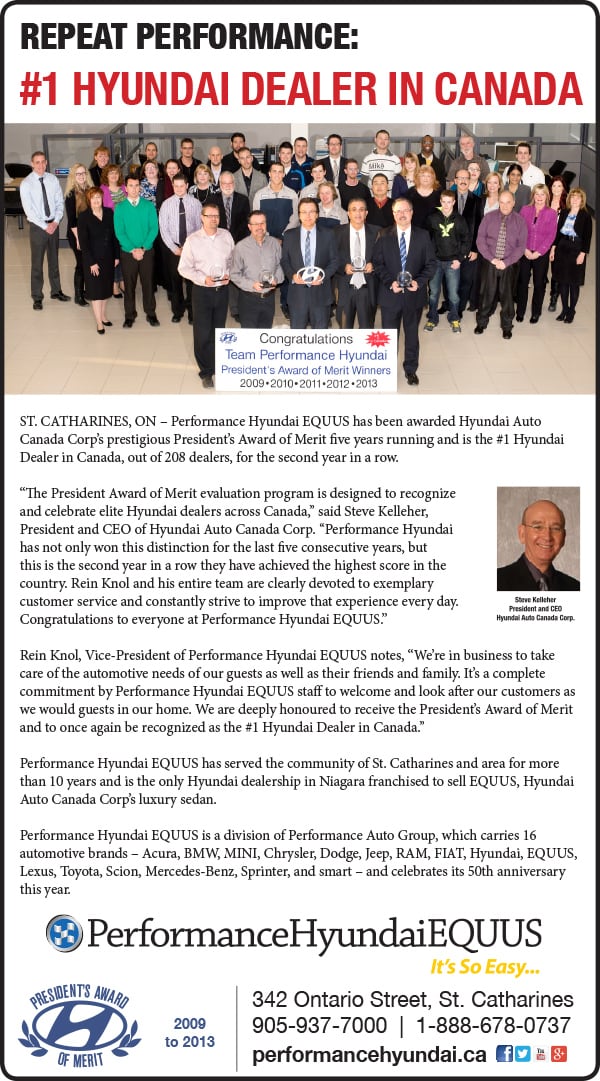 ST. CATHARINES, ON - Performance Hyundai has been awarded Hyundai Auto Canada Corp's prestigious President's Award of Merit five years running and is the #1 Hyundai Dealer in Canada, out of 208 dealers, for the second year in a row.

"The President Award of Merit evaluation program is designed to recognize and celebrate elite Hyundai dealers across Canada," said Steve Kelleher, President and CEO of Hyundai Auto Canada Corp. "Performance Hyundai has not only won this distinction for the last five consecutive years, but this is the second year in a row they have achieved the highest score in the country. Rein Knol and his entire team are clearly devoted to exemplary customer service and constantly strive to improve that experience every day. Congratulations to everyone at Performance Hyundai ."

Rein Knol, Vice-President of Performance Hyundai notes, "We're in business to take care of the automotive needs of our guests as well as their friends and family. It's a complete commitment by Performance Hyundai staff to welcome and look after our customers as we would guests in our home. We are deeply honoured to receive the President's Award of Merit and to once again be recognized as the #1 Hyundai Dealer in Canada."

Performance Hyundai has served the community of St. Catharines and area for more than 10 years and is the only Hyundai dealership in Niagara franchised to sell EQUUS, Hyundai Auto Canada Corp's luxury sedan.

Performance Hyundai Is The #1 Hyundai Dealer in Canada! 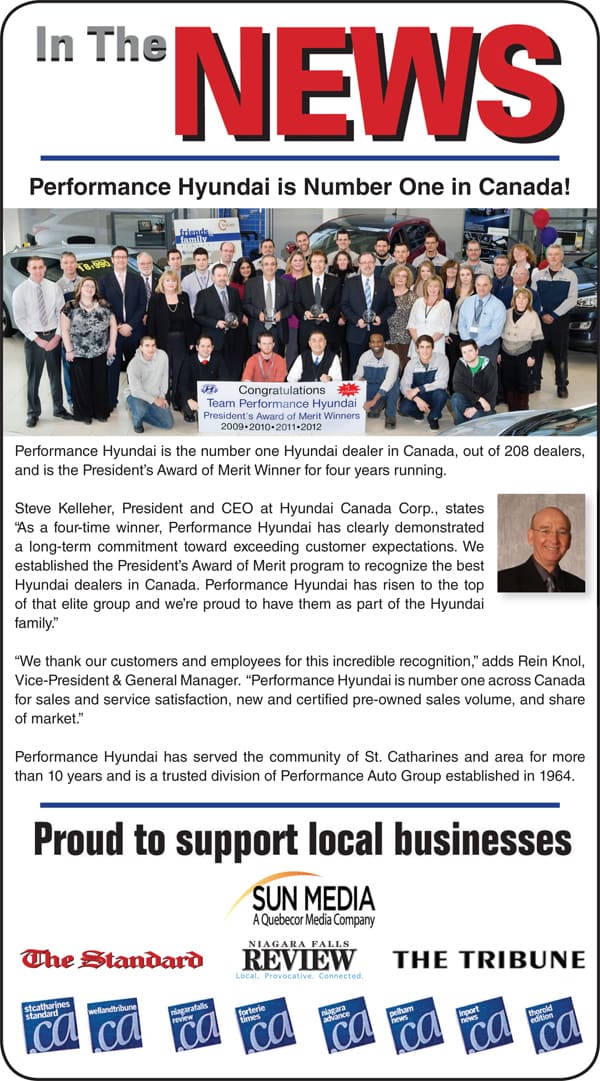 Performance Hyundai is the number one Hyundai dealer in Canada, out of 208 dealers, and is the President's Award of Merit Winner for four years running.

Steve Kelleher, President and CEO at Hyundai Canada Corp., states
"As a four-time winner, Performance Hyundai has clearly demonstrated a long-term commitment toward exceeding customer expectations. We established the President's Award of Merit program to recognize the best Hyundai dealers in Canada. Performance Hyundai has risen to the top of that elite group and we're proud to have them as part of the Hyundai family."

"We thank our customers and employees for this incredible recognition," adds Rein Knol, Vice-President & General Manager. "Performance Hyundai is number one across Canada
for sales and service satisfaction, new and certified pre-owned sales volume, and share of market."

Performance Hyundai has served the community of St. Catharines and area for more than 10 years and is a trusted division of Performance Auto Group established in 1964. 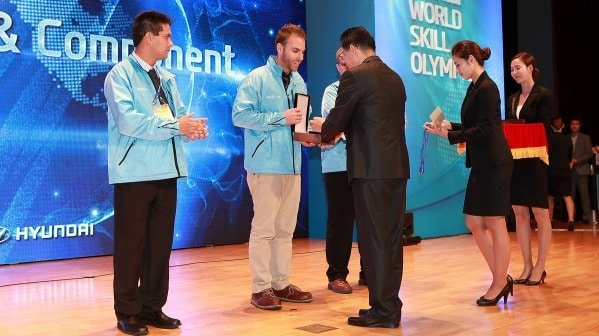 The 28-year-old Niagara resident not only won the Hyundai Canada National Skills competition in September, he recently brought home a silver medal in the 10th Hyundai World Skills Olympics in Seoul, Korea in late October.

Strati is currently a third-year apprentice who attends classes at NC at night while working days at Performance Hyundai in St. Catharines. He has been working at Performance since 2006, beginning as a lubricator technician. After developing an interest in auto electric, he decided to make it his specialty. Now he is a Hyundai Certified Senior Master Technician.

As a technician with a master qualification and a top exam grade in his zone, Strati qualified for the Hyundai National Skills competition held Sept. 19, 2013 at Hyundai Canada's head office. There he competed against the top four Hyundai technicians in the country.

Competitors had to complete a written exam, and five practical examinations where vehicles were purposely faulted and competitors were judged on their approaches and procedures to repair them. They were also racing against the clock, judged on how quickly they could repair a vehicle with crippling fault.

Reigning supreme against the top Hyundai technicians in the country, Strati won the 2013 Technician of the Year Award, which qualified him for the 10th Hyundai World Skills Olympics in Korea.

The world skills competition was similar to the national competition. Despite facing the challenge of jet lag and having to diagnose a vehicle at what would have been 2 a.m. Ontario time, Strati placed second in the written exam and engine diagnostic components, winning a silver medal for Canada.

"It was an unbelievable achievement for me to place second against the best Hyundai Technicians in the world," he said.

Strati said he felt honoured by the opportunity to compete at the national and international level, and to represent Canada in Korea.

"The experience has meant so much to me. It has been a challenge to strive for academic excellence at NC and Hyundai training," he said. "The drive to always do better and learn from my mistakes has made the last two months so rewarding."

He believes that his education at NC has played a role in his success.

"My experience with NC over the past three years has been incredible. My professors have been fantastic since day one. They are always willing to help, and go the extra mile for students," he said. "I have never left one of my classes without learning something new I owe a big piece of my personal success to the professors and technical trainers that I have had the pleasure to work with."

John Johnson, coordinator of Automotive Apprenticeship at NC said Strati's accomplishment deserves a "big pat on the back."

"I think his accomplishment is significant because very few people can accomplish what he has. This type of competition requires a very high degree of knowledge and skill," he said. 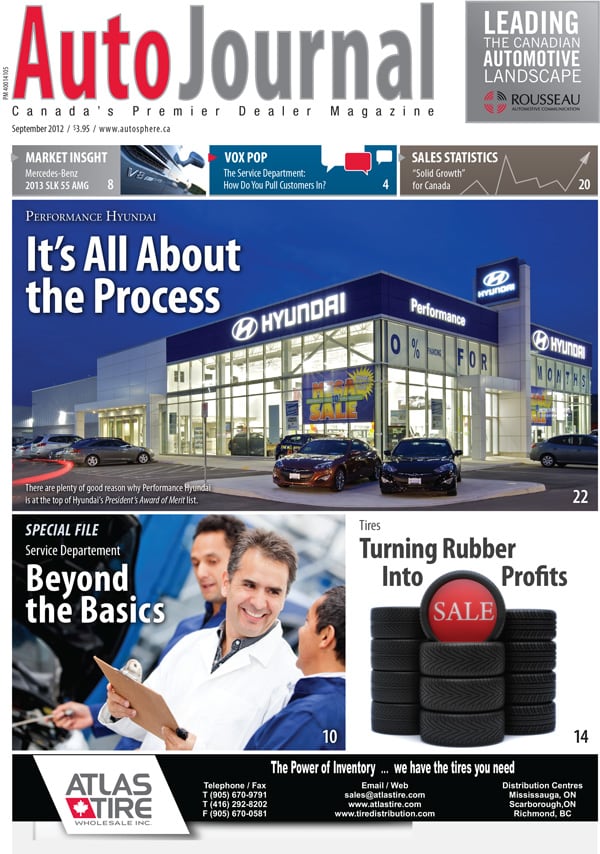